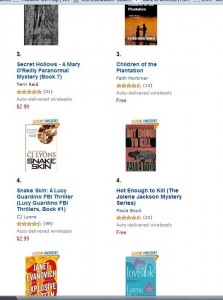 A few weeks ago, Hot Enough to Kill was featured in an amazon.com Kindle free giveaway and thousands of people took advantage of it, putting Hot at #4 on the Women Sleuths list. It's still only $0.99, so get a copy now!

Hot Enough to Kill has been re-edited, revised and re-eccentricized. Okay, the truth is that I just intended to clean up the original print version before I published it on Kindle--fix a few typos and little things I missed the first time around. However, one thing led to another, and I got a bit carried away. So, if you read the original print version years ago, give the ebook a try. I sure had fun with it!

As you may know, I also write nonfiction, and I've just finished a second book that will be in bookstores in September. It's called, Living the Life You Love--The No-Nonsense Guide to Total Transformation. I'm very excited about that. And now that it is off into the publishing process, I'm catching up with what Jolene and Lucille have been doing, and it's not pretty.

I'd like to tell you that Jolene has matured--and she has, a little--but there just hasn't been a lot of time for introspection lately. I'd also like to tell you that Lucille is now behaving herself and not causing trouble, but, that's just not how things work in Kickapoo, Texas, now is it?

I don't know how things can worse, but somehow they do. This time Jolene gets handed keys to the castle--oh, it sounds really good--but there are alligators in the moat, bats in the belfry and a whole bunch of toxic waste mucking up the Texas Tea.

Keep an eye out for the 4th Jolene Jackson Mystery, Killer Moves! They need to be read in order, so make sure you've caught up with the story!

Here are the books in order: