There are tons of reviews on amazon for all the books, so check those out!

5.0 out of 5 stars--funny wonderful book, December 8, 2012
I would compare her to Rita Mae Brown who wrote some of the funniest books I have ever read. Jolene and her mother's interactions keeps you laughing out loud. She weaves a good tale around some pretty funny but weird characters. Can't wait to read the next one.

5.0 out of 5 stars--Great first book!, November 5, 2012
By Hannah - Fell in love with the characters immediately! I can't wait to read the next books in this series. Loads of fun!

5.0 out of 5 stars--Robby O.: This is a rollicking, hilarious book that will keep the reader laughing right through to the very end. With a great cast of characters, you cannot help but love each and every one of them. I must mention the gossip center of Kickapoo, the local Dairy Queen. What can I say? If you want to learn something, go to the DQ. This book is filled with mystery, suspense, romance and humor with a long list of suspects. The reader is in for a surprise ending. This is the first book in the Jolene Jackson Mystery series. You won’t want to miss the future adventures of Jolene and Lucille. A recommended read for all who love a little humor with their mystery.

5.0 out of 5 stars--Hot, December 6, 2012
By wayne - A well written book that keeps you wondering right up to the end . A cast of characters you will have empathy with,laugh at,and thoroughly enjoy.

5.0 out of 5 stars--Hot Enough to Kill by Paula Boyd, November 30, 2012
By Gayle Armstrong (Waukegan, IL.) This is the very first book I have read by Paula Boyd. I read the quick synopsis on the website. The book sounded interesting. When I started reading the book I thought it started out a little slow. I continued reading and the book quickly captured my interest. By the end of the first day of reading I could hardly put the book down. Today was my second day of reading and I just had to finish it. Read for 4 hours and the book absolutely kept me on the edge of my seat. Great writing and an entertaining read!

5.0 out of 5 stars--Good read, November 30, 2012
By Linda - This was one of the best books I have read in quite a while it was funny fast with a good story that had me stumped

5.0 out of 5 stars--Absolutely loved it........., November 13, 2012
By shopper2010 (OH) -I absolutely loved this series. NOTE: For people who love fast paced serious murder mysteries then I have to say that I am not sure you would like this series. Not much swearing & little on the sex. I would also not be too sure men or young people would enjoy this series either for the reasons I loved it.

I am a serious mystery reader and this series might not usually interest me but I just loved the relationship with the mother & daughter. The mom is just a hoot. She is feisty, evades truth & is completely unpredictable. She doesn't care if she hits anyone with her over sized purse no matter if it is a cop or anyone else. She calls it like she sees it and doesn't care if it is "politically" correct or not. However, if I was Jolene I probably would want to strangle her. The dialogue cracks me up. I love what Jolene is thinking between what she says to her mom. The murder aspect was very good too.

All in all if you love to read books that are funny with a mystery then I think you would love this series.

NEW Reviews from Readers Favorite are also included below!

"Don't mess with Texas! You'll laugh your way from Kickapoo to Redwater Falls and back." -- Linda Huntley Wills, REDBOOK

"Anyone who enjoys the works of Janet Evanovich or Joan Hess is going to love Ms. Boyd." -- Toby Bromberg, Romantic Times

"This is a wild ride with thrills, chills and laughs galore. Highly Recommended." -- Editor, I *Love* a Mystery

5 Stars and 5+ Laughs! Has to be film adapted. Would make a delightful audiobook. " ...a hoot and a half of rollicking good mystery! The best dang novel I've read all year!" -- Leann Arndt, The Midwest Book Review

"The mystery genre has witnessed an abundance of female sleuths, but none quite like Jolene Jackson and her mother, Lucille." -- Argus Observer

"... comedic characters you'll just love. ...a humor you can't resist. I can't remember the last time that I read a book as light and refreshing as this." -- Pamela Stone, My Shelf

"This first entry of an apparent series will leave readers loudly laughing at the antics of Jolene and her mother. Hot Enough to Kill is a tongue-in-cheek look at relationships and amateur sleuthing. Still, the mystery has a character of its own that adds to a wonderful plot." -- Harriet Klausner

"Suffice to say this is a page turner. I predict you will enjoy it!" -- Anne Thompson, Rocky Ford Daily Gazette

"I had so much fun reading this that I hated to have it end. Paula Boyd writes with pure Texas humor, weaving together a good whodunit and providing a backdrop that won't be forgotten. Hot Enough to Kill is a must read for your Sherlock funny bone." -- Judi Clark, MostlyFiction.com

"With an irreverent wit and an imagination that knows no bounds, she takes readers for a ride they won't soon forget." -- Epinions.com

"There seems little doubt that Boyd will be compared most favorably to Hess and Evanovich." -- Doris Ann Norris, BookBrowser 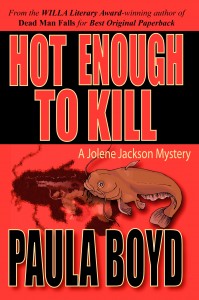 Reviewed by Lynn F. for ReadersFavorite.com

Hot Enough To Kill by Paula Boyd centers around Kickapoo, Texas. Jolene Jackson returned to Texas to get her mother Lucille, a female version of Dirty Harry, out of jail. After her boyfriend was murdered, she was the suspect. The mother and daughter teamed up to find the killer. Was someone out to get Lucille and Jo or were the police the true target? With twists and turns and a list of suspects, Jo and her purse-swinging, gun-toting mother are along for the ride. Although they were on the run from the temporary sheriff, Thelma and Louise they were not! As they tried to get themselves out of the mix they were in, we wondered just what mama had up her sleeve this time.

This is a rollicking, hilarious book that will keep the reader laughing right through to the very end. With a great cast of characters, you cannot help but love each and every one of them. I must mention the gossip center of Kickapoo, the local Dairy Queen. What can I say? If you want to learn something, go to the DQ. This book is filled with mystery, suspense, romance and humor with a long list of suspects. The reader is in for a surprise ending. This is the first book in the Jolene Jackson Mystery series. You won’t want to miss the future adventures of Jolene and Lucille. A recommended read for all who love a little humor with their mystery. 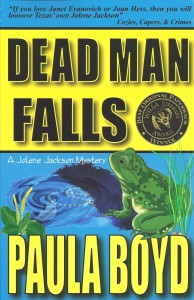 Reviewed by Lynn F. for ReadersFavorite.com

Dead Man Falls by Paula Boyd is book two in her Jolene Jackson Mystery series and I have to say it’s as hilarious as the first book. Once again Jolene is back in Kickapoo, Texas this time for her mother’s big birthday bash. This is a yearly occasion and always held at the gossip center of Kickapoo: the Dairy Queen. The biggest thing going on in the area this time besides her mother’s birthday is the brand new waterfall they have made. Funny there is a town called Red River Falls and no waterfall. Not only is the falls the main attraction, so is the body Jolene just happens to spot falling down the rocks into the river as they have what would technically be called a ribbon cutting. Seems the minute Jolene hits town bodies start showing up, but this time it’s a blast from the past, her high school years. Someone is out to get rid of some of the classmates and Jolene and old sweetheart Sheriff Jerry Don Parker are also a target. As the bodies pile up all around the falls the race is on to find the killer out of the many suspects.

Once again Paula Body takes the reader on a rollicking hilarious ride through the country side of Texas. As we keep up with the same characters in the first book we have a couple of new ones added. This is a great series!